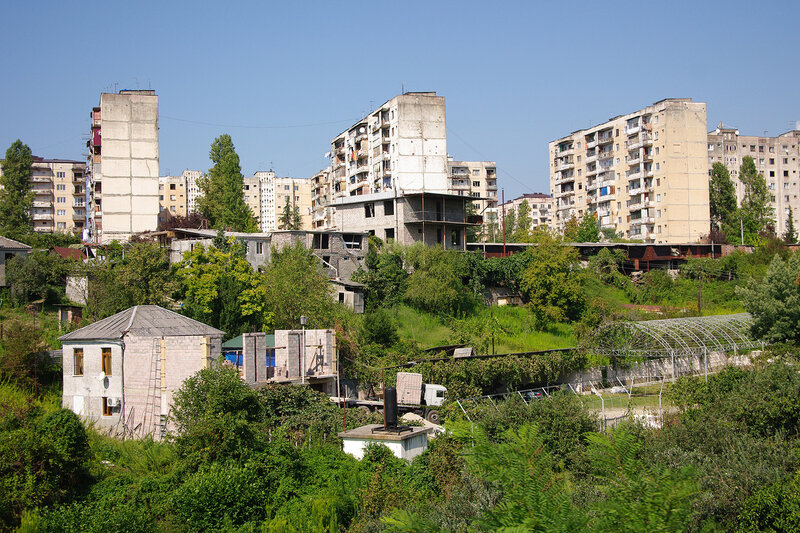 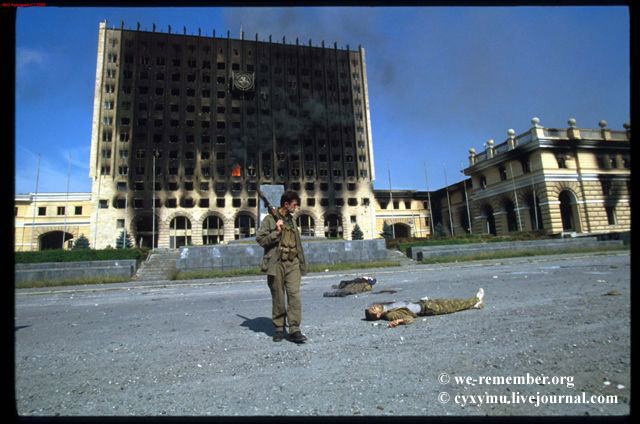 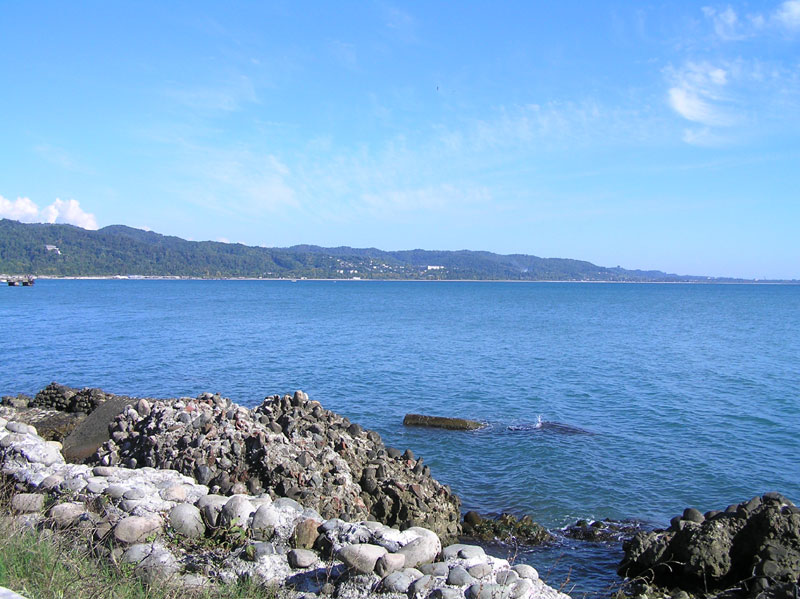 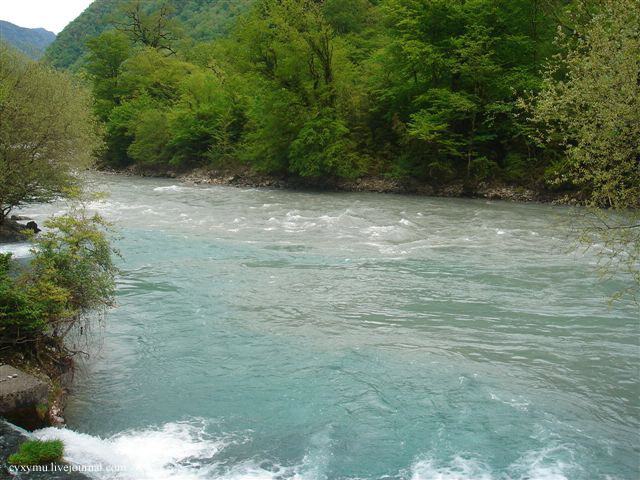 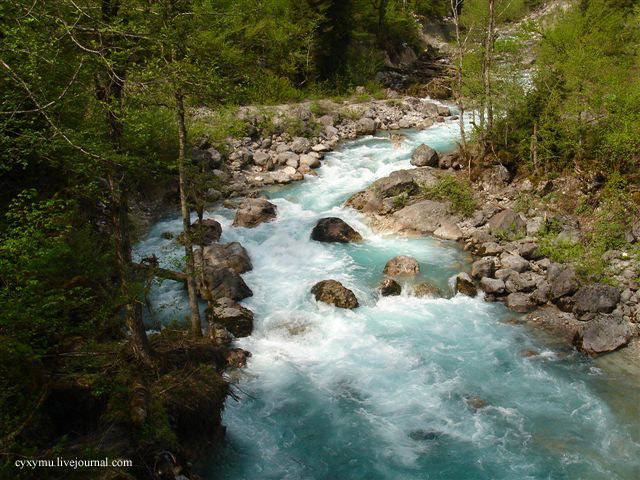 Abkhazia /æbˈkeɪʒə/ or /æbˈkɑziə/ (Abkhaz: Аҧсны Apsny, Georgian: აფხაზეთი Apkhazeti, or Abkhazeti, Russian: Абха́зия Abhazia) is a self-proclaimed republic of 8,600 km² (3,300 sq.mi.) in the Caucasus. It is a de jure autonomous republic within Georgia, but is de facto independent of Georgia, although not recognized as such internationally. The capital is Sukhumi.


International organizations (UN, OSCE, Council of the European Union, etc) recognize Abkhazia as part of Georgia and are urging both sides to settle the conflict through peaceful means. However, the Abkhaz de facto separatist government considers Abkhazia a sovereign country.

Meanwhile the Russian State Duma is looking for legal ways to incorporate this region into the Russian Federation, while Russian media produce numerous materials in support of separatist rule. During the war, Russian authorities have contributed tremendously by supplying military and financial aid to the separatist side. Since the beginning of the war, Russia has politically and militarily contributed in the creation of the separatist movement in Abkhazia. Today, Russia still maintains a strong political and military influence over the de facto rule in Abkhazia.

Abkhazia covers an area of about 8,600 km² at the western end of Georgia, on the north shore of the Black Sea. The Caucasus Mountains to the north and the northeast divide Abkhazia from Circassia. To the east, the region is bordered by Svanetia. To the southeast, Abkhazia is bounded by Samegrelo; and on the south and southwest by the Black Sea.

The republic is extremely mountainous (nearly 75% is classified as mountains or foothills) and settlement is largely confined to the coast and a number of deep, well-watered valleys. The Greater Caucasus Mountain Range runs along the region's northern border. The Gagra, Bziphi, and Kodori Ranges branch off from the Main Caucasus Range. The highest peaks of Abkhazia are in the northeast and east (along the border with Svanetia) and several exceed 4,000 meters (13,120 feet) above sea level. The climate is quite mild, which in the Soviet times caused it to become a popular holiday destination known as the "Georgian Riviera". It is also renowned for its agricultural produce, including tea, tobacco, wine and fruits.

Abkhazia is well known for its beauty and contrasting landscapes. The landscapes of the region range from coastal forests (endemic pine forests near Bichvinta/Pitsunda) and citrus plantations, to eternal snows and glaciers to the north of the republic. Because of Abkhazia's complex topographic setting, most of the territory has been spared from significant human cultivation and development. Therefore, a large portion of Abkhazia (nearly 70% of the territory) is still covered by forests today. Abkhazia is also well known for the high number of endemic species of plants that are found only in the Caucasus, only in Georgia, or only in Abkhazia.

Southeastern Abkhazia, a part of the Colchis Lowland, is covered by Colchian forests (alder, hornbeam, oak, beech), or by citrus and tea plantations. The foothills, up to an elevation of 600 meters (1,968 feet) above sea level, are covered by deciduous forests (with evergreen elements), and include tree species such as oak, hornbeam, beech, and buxus. The forest cover from 600 to 1,800 meters (1,960-5,904 ft.) above sea level is made up of both deciduous and coniferous species of trees. The most common species are beech, spruce, and fir. The mixed forest zone is home to some of the tallest trees in Europe and the world, where some specimens of the Nordmann Fir (especially around Lake Ritsa) reach heights of over 70 meters (230 feet). The zone extending 1,800-2,900 m (5,904-9,512 ft.) above sea level is made up of either subalpine forests or alpine meadows. Territory lying above 2,900 m (9,512 ft.) is mainly covered by eternal snows and glaciers.

Because of Abkhazia's proximity to the Black Sea, its climate is very mild, considering the northern latitude. The Caucasus Mountains are greatly responsible for moderating the region's climate, as they shield Abkhazia from cold northerly winds.

The coastal areas of the Republic have a subtropical climate, where the average annual temperature in most regions is around 15 degrees Celsius. Average winter (January) temperatures vary between 4 and 6 degrees C, while average summer (July) temperatures are anywhere between 22 and 23 degrees C. The coastal territory rarely experiences strong frosts during the winter.

Abkhazia receives high amounts of precipitation, but is known for its unique micro-climate (transitional from subtropical to mountain) along most of its coast, causing lower levels of humidity. The annual precipitation along the coast ranges from 1,100 to 1,500 mm (43-59 inches). The foothills, the lower ranges, and the interior gorges of the Republic receive anywhere between 1,000 and 1,800 mm (39-71 in.) of precipitation annually. Some of the interior gorges that are sheltered from the moist influences of the Black Sea receive the lowest amounts of precipitation. The higher mountainous regions receive 1,700-3,500 mm (67-138 in.) of precipitation per year. Although there is usually no significant snowfall in the coastal regions, the mountains of Abkhazia do receive significant amounts of snow. Avalanches in the northeast sometimes pose a threat to populated areas. Snow depths often exceed 5 meters (18 feet) in some of the high, mountainous areas facing the Black Sea.

The demography of Abkhazia has undergone a massive shift since the 1990s. At the time of the last Soviet census in 1989, it had a population of about 500 000, of whom 48% were ethnic Georgians (principally Mingrels) and only 17% were Abkhaz.

As the Soviet Union began to disintegrate at the end of the 1980s, ethnic tension grew between the Abkhaz and Georgians over Georgia's moves towards independence. Many Abkhaz opposed this, fearing that an independent Georgia would lead to "Georgianization", and argued instead for the establishment of Abkhazia as an independent republic in its own right. The dispute turned violent on 16 July 1989 in Sukhumi. Sixteen Georgians are said to have been killed and another 137 injured when they tried to enroll in a Georgian University instead of an Abkhaz one. After several days of violence, Soviet troops restored order in the city, but blamed rival nationalist paramilitaries for "provoking" confrontations.

Georgia declared independence on 9 April 1991, under the rule of the former Soviet dissident Zviad Gamsakhurdia. Gamsakhurdia's rule became unpopular, and that December, the Georgian National Guard, under the command of Tengiz Kitovani, laid siege to the offices of Gamsakhurdia's government in Tbilisi. After months of stalemate, he was forced to resign in January 1992. He was replaced as president by Eduard Shevardnadze, the former Soviet foreign minister and architect of the disintegration of the Soviet Union. Shevardnadze inherited a government dominated by hardline Georgian nationalists, and although he was not an ethnic nationalist, he did little to avoid being seen as supporting the government figures and powerful coup leaders who were.

On 21 February 1992, Georgia's ruling Military Council announced that it was abolishing the Soviet-era constitution and restoring the 1921 Constitution of the Democratic Republic of Georgia. Many Abkhazians interpreted this as an abolition of their autonomous status. In response, on 23 July 1992, the Abkhazia government effectively declared independence, although this gesture went unrecognized by any other country. The Georgian government accused Gamsakhurdia supporters of kidnapping Georgia's interior minister and holding him captive in Abkhazia. The Georgian government dispatched 3,000 troops to the region, ostensibly to restore order. Heavy fighting between Georgian forces and Abkhazian militia broke out in and around Sukhumi. The Abkhazian authorities rejected the government's claims, claiming that it was merely a pretext for an invasion. After about a week's fighting and many casualties on both sides, Georgian government forces managed to take control of most of Abkhazia, and closed down the regional parliament.

The Abkhazians' military defeat was met with a hostile response by the self-styled Confederation of Mountain Peoples of the Caucasus, an umbrella group uniting a number of pro-Russian movements in the North Caucasus, Russia (Chechens, Cossacks, Ossetians and others). Hundreds of volunteer paramilitaries from Russia (including the then little known Shamil Basayev) joined forces with the Abkhazian separatists to fight the Georgian government forces. In September, the Abkhazians and Russian paramilitaries mounted a major offensive after breaking a cease-fire, which drove the Georgian forces out of large swathes of the republic. Shevardnadze's government accused Russia of giving covert military support to the rebels with the aim of "detaching from Georgia its native territory and the Georgia-Russian frontier land". The year 1992 ended with the rebels in control of much of Abkhazia west of Sukhumi. Significant "ethnic cleansing" occurred on both sides, with Abkhazians displaced from Georgian-held territory and vice-versa; some 3,000 people were reported to have been killed in this first phase of the war, see Ethnic cleansing of Georgians in Abkhazia.

The conflict remained stalemated until July 1993, when Abkhazian (separatist) militia launched an attack on Georgian-held Sukhumi. The capital was surrounded and heavily shelled, with Shevardnadze himself trapped in the city. Although a truce was declared at the end of July, this collapsed after a renewed Abkhaz attack in mid-September. After ten days of heavy fighting, Sukhumi fell on 27 September, 1993. Newly appointed Georgian President Eduard Shevardnadze narrowly escaped death, having vowed to stay in the city no matter what, but he was eventually forced to flee when separatist snipers fired on the hotel where he was residing. Shevardnadze had to rely on the Russian navy to evacuate him from Sukhumi.

The separatist forces quickly overran the rest of Abkhazia as the Georgian government faced a second threat: an uprising by the supporters of the deposed Zviad Gamsakhurdia in the region of Mingrelia (Samegrelo). In the chaotic aftermath of defeat, almost the entire non-Abkhazian population fled the region by sea or over the mountains. Many thousands died — it is thought that as many as 10,000 may have perished — and some 250,000-300,000 people were forced into exile.
Collapse